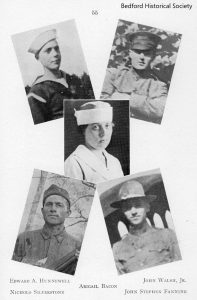 “The signing of the peace was suitably celebrated in this town. A Peace rally was held on Monday evening (Armistice Day) which was attended by practically everyone in town. A parade was held starting at the town hall . . . and torches and flags were carried by participants. All gathered in the hall afterwards for a community sing. . . Three rousing cheers were given for the Allied Nations and their leaders . . .At the close of the meeting the Kaiser was escorted through the hall by several pallbearers, and another parade formed which marched to the Union School grounds where the Kaiser was cremated in a tremendous bonfire.”