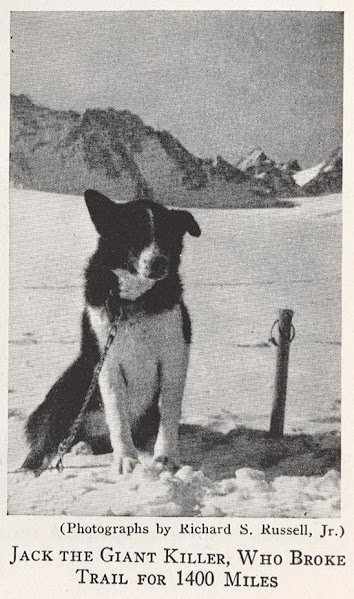 Sometimes even seasoned Bedford historians are surprised when a bit of lost Bedford lore resurfaces. This was the case last month when the Society received an email from a gentleman named David Murray, who was looking for information about his father, Gillis Murray, who recently passed away. Gillis was the son of a prominent Cambridge manufacturer and grew up here in Bedford during the 1930s and 40s. The Murrays lived in an old farm house on Wilson Road, still known as the Wilson Farm, and David was hoping to confirm and expand on an intriguing story from his father’s past that has significance well beyond Bedford.

According to David, Gillis Murray and his family were the final caretakers of the famous sled dog, Jack the Giant Killer. Jack, a Labrador-Newfoundland mix, was a lead sled dog on Admiral Richard E. Byrd’s Second Antarctic Expedition. During the expedition, Jack earned the nickname “Giant Killer” because of his toughness and independence, and because he possessed the uncanny ability to lead his sled safely along the edge of dangerous crevasses, saving the members of the expedition on several occasions. Jack was so beloved that Stuart Paine, in charge of the dog teams for the expedition, published a book called The Long Whip: The Story of a Great Husky detailing the exploits of this remarkable dog. Unlike many of the expedition’s other sled dogs who did not make it back to the United States, Jack received a ticker tape parade on Fifth Avenue and Paine made sure Jack was with him when he returned home to Shankshassick, his family’s farm in Durham, New Hampshire.

It is here that the story becomes a bit blurred. Stuart Paine, at some point after his return from the expedition, left New Hampshire to take a job in Boston. Jack, being of a large and energetic working breed, would have found city life difficult, so one can imagine that Paine wanted to find some place for Jack nearby. The Murray’s Bedford farm offered just the right combination of close proximity to Boston and open space and fresh air that Paine knew his friend Jack deserved. All that we currently know is that Jack lived with the Murrays on the Wilson Farm for five years, until he died on April 11, 1940. It is said that Admiral Byrd wrote a eulogy for Jack that was published in many newspapers and that Jack was buried on Paine’s family farm.

In order to fill in some of the gaps in this story, we contacted the Durham Historical Society for information about the Shankshassick Farm that is still owned by Sally Paine Ford, Stuart Paine’s niece. Sally has provided some additional details. She confirmed that when Jack died, Paine collected the dog’s remains from Bedford and drove them to Shankshassick Farm. She recounts that her grandmother had planned on returning to New Hampshire with Paine prior to Jack’s death, and that Paine asked if she would find riding with Jack’s remains too distressing. Sally claims that she replied, “It would be an honor to ride with you and Jack.” Sally also confirmed that Jack’s final resting place is indeed on the Shankshassick Farm.

Sally Paine Ford promises that there is much more to this story, and we are looking forward to including it among other fascinating stories from Bedford’s past.