Celebrating the 1916 National Election in Bedford

[In indexing the Charles Jenks Scrapbooks for the Society, Sharon McDonald found a delightful set of newspaper articles from the November, 1916 Bedford Enterprise. She summarizes them for us here:]

It was election time in 1916, and the presidential race between Woodrow Wilson and Charles Evans Hughes 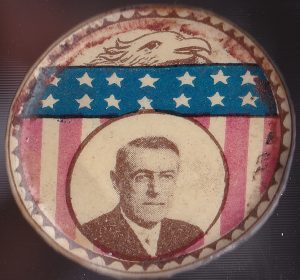 was too close to foretell. Bedford resident Fred F. Cook, however, was sure that his candidate, Hughes, would win. He and his friend Randall A. Whittier argued about it as they rode the Boston commuter train. Randall was just as sure that Wilson would be reelected.  Rashly, Cook made a bet: if Hughes didn’t win the election, he, Cook, would harness himself up to his one horse shay and pull Whittier around the streets of Bedford. If Hughes did win, it would be Whittier who would play horse.

The presidential campaign had been intense. The Great War had begun in Europe, and Woodrow Wilson was promising to keep America out of the war. Hughes, on the other hand, wanted to prepare the United States to join the war.

For the first time, Bedford was going to receive the results of the election as quickly as they were announced. The Bedford Civic Club (Randall Whittier, president) was renting a newswire, and for the price of 25 cents, you could join the crowd upstairs in the Town Hall on election night and listen as the votes were counted across the nation. The evening would be festive as well as patriotic, for the Civic Club would be serving oyster stew.

Even with the oyster stew, it was a long night, but at the end of it, Woodrow Wilson had won again. Fred Cook had to make good on his bet.

Cook, a man of about fifty, worked as a salesman of paper boxes. He was also the captain of the

Lexington/Bedford Minutemen, and a fireman. Whittier was a bit younger, about thirty years old, and worked as a bank teller. The whole town turned out to see the forfeit, and it was an unforgettable occasion. Cook took up the traces of his shay with Whittier aboard, and a parade worthy of the Fourth of July stepped off.  The Lexington Drum Corps set the pace, and two triumphant Democratic donkeys tramped along behind. Then fell in practically the entire town, carrying torches and signs reading “Wilson Whittier Winner.” From his seat in the carriage, the local winner himself bowed grandly to his audience.

After proceeding up and down all of the main streets of Bedford, the parade broke up in front of the Town Hall, and all went inside. There they were treated to a program of wit and farce, with local politicians the butt of the jokes. (Woodrow Wilson himself was invited, but alas could not attend.) Then, to the accompaniment of music from a twenty piece band, all enjoyed a collation of coffee and beans.

Cook’s pronouncement on the bet?

“To be a horse is no pink tea,

And this was caused by the G.O.P.”