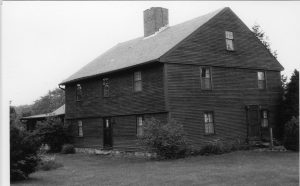 One scenario dates the house to Richard’s parents’ marriage.  George1 Wheeler was an early settler in Concord, having arrived in 1639 with his young family including a son William2 (ca.1630-1683) born in England.  William married Hannah Buss in 1659, and they had 8 children including their youngest son George3 (ca.1674-1737) born in Concord.  George married Abigail Hosmer in 1695, and the assumed house construction date of 1695 coincides with their marriage.  Their oldest son Richard4 (born ca.1696) inherited the house that now bears his name.  He married Jemmima French in 1720.

An alternate scenario is that Robert Merriam in his 1682 will gave Joseph French “20 acres of land and all the housing which stands on it”.  In 1719 Jemmima French received a deed from her father, Lt. Joseph French, and in 1724 Richard bought some property from his father-in-law.  Either one of those deeds possibly conveyed this house to the young couple.

Both Richard Wheeler and his father-in-law were among the petitioners for establishment of the Town of Bedford.  Richard’s name is mentioned as a land owner in the charter description of the new town’s boundaries in 1729.  He was also a foundation member of the church in 1730.  Sometime shortly after his 3rd marriage (in December 1760 to Anne Bateman) Richard and his new wife relocated elsewhere.

William Page (1737-1812) married his wife Patte Hill in 1763 and purchased the property that year.  As a member of Capt. John Moore’s militia he marched from this house to the Concord fight in April 1775.  He served as Town Treasurer in 1777.  Their only child, Lucy, married Mather Hayward, (Page’s nephew?), and they inherited the property.  The 1852 atlas shows M. Hayward as owner.

Owners of the house since that time include the following, with their descendants in some cases.

1885 – (William) Edward McGrath – He acquired the property from Marcus Webber, who took over Sinnett’s land when the mortgage was not paid.  The 1889 atlas lists “Mrs. Kelly & W.

McGrath” on the property; she probably had a “widow’s third” entitlement.  The 1906 atlas shows E. McGrath as the sole owner.

1948 – Daniel & Regina Donahue – They registered their home business as the “Old Garrison House”.

Farmland that went with the house varied in acreage over the years.  After WW2, farming became uneconomical and Bedford’s population grew rapidly, so the farm was subdivided into house lots.  The house was acquired with 1.9 acres of land in 1948 by Daniel and Regina Donahue.  In 2000 the new owners further subdivided the property into 2 lots, so the house now sits on about 0.9 acres.

The Richard Wheeler house is the oldest dwelling extant on Concord Road.  Oriented facing south on its lot, this 2-1/2 story Colonial house has a fieldstone and granite foundation, wood clapboard siding, a side-gabled asphalt shingle roof, and a large brick center chimney.  There is a slight overhang of the second story on the facade as well as an overhang of the end girt visible on the sidewall.  Large stone stoops remain at the entrances to the house; there is an extra one here because previous owners filled in a rear door which connected to a barn, also now gone.  Three bays across and two to three bays deep, the main block of the house has a center entry with a plain surround, a secondary entry on the east side, 12/12 sash, and a side-gabled addition with screened porch on the west side.  There are one-story gabled additions to the rear.

There were several outbuildings, one reportedly also built in the late 1600s, that were demolished by the current owner when the lot was subdivided in 2000.  A new house was constructed on the new lot.

The following description of the interior was provided to the Bedford Historical Society in 2000 by the owners at that time, Harry and Elizabeth Morehead:

“In the interior, the post and beam construction is evident in the exposed beams in the kitchen and the boxed beams (ceiling and corners) in the more “modernized” rooms.  The kitchen has all its original wood with the addition of one modern beam that replaces a wall that was taken out in the 1920s.  This wall would have marked  off a “borning room” near the kitchen fireplace.  This “room” has a date carved in one of the ceiling beams: “1748 XII”.The floors are maple in the kitchen and dining room and date also from the 1920s.  The kitchen fireplace is a facade that has an opening for a wood burning stove and a large stone hearth.  Although there is a cellar, it is U-shaped and does not include where the stone hearth is located.

In the parlor the paneling dates from 1710 and matches similar paneling in the Concord Antiquarian Museum with raised panels.  Here and in the kitchen the paneling is the horizontal placement of wide boards.  The floors are wide pine boards with a honey colored finish,  This large fireplace has a damper, and the kettle holder inserted in the brick is original to the house.  In a small panel over the door leading from the parlor to the front hall, there is a heart cut out, just large enough for a hand to go through.  One of the legends is that couples married by holding hands through this panel but not able to see each other.

The paneling in the dining room has more narrow boards placed vertically and dates from the 1850s.  The front hallway, opening to the front door, and its stairway goes down to the cellar and up to the attic, forming a 3rd floor.  The bannisters and design of the stairs imitate the Buckman Tavern front stairs on Lexington Green.

In the attic it is easy to see the original roof line when the house was a salt box and how the beams were “pieced” and reused when the roof was raised in the 1700s.  All the boards were pried up to blow in fiberglass insulation but are sturdy.  The widest one is 22”, wider than the King of England allowed at the time.  The center beam or ridgepole of the roof is turned at 45 degrees and was moved from the front side of the chimney to the back or north side when the roof was raised.  Wood pegs were still in use when this was accomplished, and several hand wrought nails can still be seen in place in the attic area. 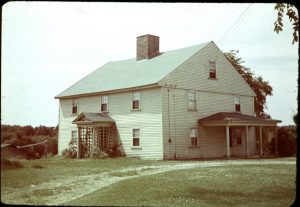 The master bedroom on the second floor has a Victorian era fireplace which is shallow and panels which date from the same time surrounding the opening.  This fireplace also has a damper to conserve heat.  The front bedroom has ornate floor to ceiling fluted columns on both sides of the fireplace, but the brickwork is behind the wall and has not been opened by the present owner.  There is a book cupboard here and in the smaller bedroom behind it which were built about 1980.  The inside bedroom on the north side of the second floor is the only room whose outside wall has not been insulated by the owner.  All others have been done in the past 20 years.  The back wall of the house is sagging, 6” off to be exact.  This was due to the sill on the north side of the house having rotted years before.  This was repaired shortly after the present owners moved in.  This condition had existed for many years, as an added wall had doorways in which the slant was corrected.

The floors on the second floor are the widest in the main house but are all painted.  Doors and hardware throughout the house are antique with a few reproduction pieces.  The front half of the house received modern windows 15 years ago and the back half and attic were replaced in 1999.  The addition was completed in 1988.

The bathroom upstairs is paneled with weathered wood taken from a collapsed barn on the property and fashioned in place in 1978.  This room has a door which leads into a large closet which is located in the attic of the addition.

The nickname “Garrison House” was used for the property in previous centuries, perhaps because it would have been a secure dwelling occupying high ground in the event of an Indian attack.  While cleaning the stairwell about ten years ago, the lady of the house happened upon an arrowhead that had fallen with some plaster from above the stairs, a direct arrow shot if you will, past the front door.  It is said that a tunnel leads from the house to an exit down the hill, as a last resort if the house were overrun or was set afire.  No one still living knows the precise location of this tunnel.”