During the 19th century, horse races that featured trotters in harness became increasingly popular in the United States. Unlike thoroughbred racing, known as “The Sport of Kings,” harness racing was a sport for the middle classes and gave rise to  a new breed of horse, the Standardbred. These animals were bred to work in harness, like the carriage horse so many owned. Standardbreds were considered sturdier than thoroughbreds and generally less high-strung. Everyone followed the races and the horses became celebrities. One of these early superstars was a horse named Uhlan. He was one of the first trotters to break the 2:00 minute mile and, most remarkable, this amazing horse began his life here in Bedford. 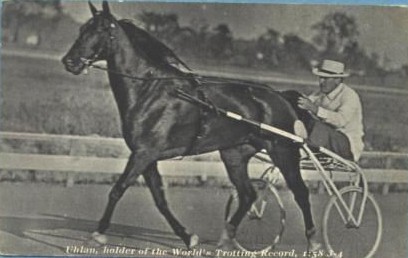 The story of Uhlan’s career is recounted in a 1914 publication, recently purchased by the Society, called The Driving Clubs of Greater Boston (edited and compiled by John H. Linnehan and Edward E. Cogswell). At the turn of the twentieth century, wealthy Bedford industrialist Arthur H. Parker established stables on Old Billerica Road, calling them the Shawsheen River Stock Farm. In the fall of 1900, Parker purchased a mare named Blonde from a Dr. Alderman of Lexington, MA, paying less than $300 for her. The following year, Parker added a stallion named Bingen to his stables, purchasing him from J. Malcolm Forbes for a price of $32,000. Bingen was a well-known stallion and is now considered one of the most important sires of the Standardbred line.  Parker bred his new acquisitions and in 1904, the foal Uhlan was born. Early on, Parker recognized Uhlan’s potential, and ordered his trainer, Ed McGrath to begin developing the colt. Uhlan proved so promising that Parker was soon racing him at Readville and Charles River Speedway. In 1907, Parker offered his three-year old to Charles Sanders of Salem, Mass for $2,500 and Sanders purchased him immediately. Sanders enlisted Robert Proctor of the Readville Track to train his new horse, and Uhlan’s career as a champion began in earnest.

In 1909, after defeating the reigning world record holder, Hamburg Belle, at the Readville track, Uhlan attracted the attention of Chicago multi-millionaire, C.K.G. Billings, who purchased him for $35,000. Billings put him under the care of a new trainer, Charles Tanner. Under Tanner, Uhlan set a world record of 1:58 for the mile in 1912. From then on, and often with Billing’s, himself, driving, Uhlan raced to international fame. He was exhibited throughout Europe and Russia; royalty and heads of state flocked to see him. Uhlan’s trainer, Tanner, had a special fondness for the horse, “He is not only high-strung, with a decided will of his own, but he is also a very wise horse – I have come in contact with few as brainy, and that had that much true individuality.” Billings retired Uhlan in 1916, bringing him to live on his estate, and often using him as a saddle horse. Uhlan died in 1935, and was buried on the Billings farm next to another champion trotter, the famous mare, Lou Dillon.

John Hervey, an early 20th century American writer and authority on horses, considered Uhlan one of the greatest trotters of all time. He wrote, ”Of all trotting champions he was the one that most filled the eye and satisfied the ideals of those who cherish high ones…

As he kept increasing his pace, instead, as most horses do under such circumstances, of dropping his head, he kept lift­ing it higher and higher. With his expanded, scar­let nos­trils, his black fore-top fly­ing in the breeze, his eyes seem­ing lit­er­ally to flash fire, and the hur­ri­cane rhythm which his fly­ing feet were beat­ing out, it was indeed a glo­ri­ous spec­ta­cle…Every­thing he did, he did as if it was a joy, a play-spell or a frolic. All this in harness—while under sad­dle he was equally ideal and perfect.” (The Harness Horse magazine, Feb 22, 1939)

And to think, this great horse began as his life running through the pastures of Bedford!