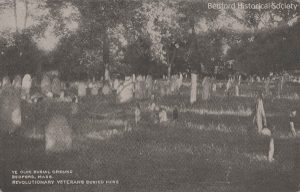 With a nod to Halloween, here is a spooky postcard of the Old Burying Ground on Springs Road, Bedford, Mass, c.1901-7. The burial ground was established in 1729-30 and was the town’s only cemetery until Shawsheen Cemetery was opened in 1849.

Slate headstones are a standard of modern Halloween décor and their “spooky” reputation started in the 1800s. Slate was a staple of colonial graveyards but began to go out of fashion in the second quarter of the 1800s as many graveyards fell into disrepair, with slate headstones bearing the brunt of the neglect. Slate was often installed without a proper foundation and was prone to movement, tipping, and breakage. Depending on the quality of the stone and how it was quarried, some slates stones were prone to deterioration and began to delaminate and flake. It also didn’t help that slate is generally dark in color and funerary artwork carved into the stones in the 1700s could be quite bleak. Starting in the 1830s with Cambridge’s Mount Auburn Cemetery, some cemeteries went so far as to temporarily prohibit slate. White marble, and later granite, became the preferred stones for monuments. Slate did enjoy a resurgence in the late 1800s with the colonial revival movement and benefitted from improved quarrying methods.