The Story of the Joseph Fitch Homestead 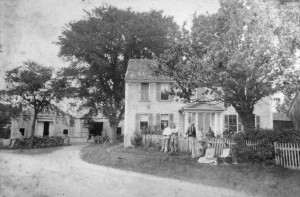 The Historical Society has received a glimpse of almost three centuries of the Joseph Fitch homestead’s history through the generosity of Ned and Susan Leeming, who have donated many artifacts (most recently some last month) that were found in the house.

First, a  bit of history.  The Joseph Fitch Homestead, formerly at 27A Carlisle Road, was located within Governor John Winthrop’s 1638 land grant.  Job Lane1 had acquired the Winthrop land grant in 1664, and upon his death a quarter was deeded to his grandson, Samuel Fitch3.  Samuel’s share was a parcel on the north end, where he settled when he married in 1695, and about 280 acres on the south end of the Winthrop Farm along the Old Concord Line (running west from Willson Park).  When the town was incorporated in 1729, he became Bedford’s first Town Clerk.

His oldest son, Joseph (1702-1769), was a house-wright.  He built Bedford’s First Meetinghouse (1729) and probably Domine Manse (ca.1733).  Joseph is also believed to have built the sawmill on Peppergrass Brook on his father’s land, which provided lumber for the buildings constructed in Bedford Center around the time of the town’s incorporation.  The southern end of North Road that connected between Fitch Tavern on The Great Road and Job Lane’s homestead (site is now 130 North Road) was built in 1734 and ran through Samuel Fitch’s land, opening it up to development.

Joseph Fitch4 married in 1731 and was believed by A.E. Brown in his History of Bedford to have built the house and barn at 27A Carlisle Road at that time for his own family.  The east end of Carlisle Road was simply a cart path to the homestead until the 1790s when the road to Carlisle was built.  After the death of his 1st wife, Joseph remarried in 1750, and he and his 2 wife left the homestead and moved to Davis Road.         After Joseph Fitch’s departure in 1750, Deacon Job Lane3 acquired the Fitch homestead as part of his farm at “the Neck” (so called) near Old Causeway Road, but he continued to live in his own homestead at 295 North Road (now the town-owned farm museum).  The Fitch homestead then remained in the Lane family for over 100 years.  His oldest son, Job Lane4 married in 1747, and he became owner of the homestead.  Job4 marched to Concord on April 19, 1775; he was seriously wounded and lost a leg.  Job Lane4 had 2 sons.  The second son, Luke5, inherited the property when his father Job4 died in 1796.   Job4 had remarried in 1777 after his 1st wife died, and they had one daughter , Fanny Lane5, who was born in 1781 (almost 13 years after Luke).

Luke Lane5 married in 1791 but died of “a fever” in 1801 at age 33, leaving his widow with four children all under 10 years old at the homestead.  His young half-sister Fanny may have helped with their upbringing, and she later acquired the property.  She lived at the homestead until her death in 1827.  Upon Fanny Lane’s death, a cousin Eliab Bridge Lane6 (1780-1853) purchased the homestead and land at public auction.  In 1833 he added an abutting one-acre triangular parcel at the intersection of Carlisle Road and North Road (now the Northside service station).

Following Eliab B. Lane’s death in 1853, the homestead was sold by his heirs to J. Quincy Blake.  Mr. Blake’s occupation as a jeweler and his status as a “gentleman” suggest that he was a man of considerable means and probably built the addition on the rear of the homestead.  In 1862 he sold the property, and it was  acquired by William Farrell (1810-1905).  The Farrells lived there and farmed for decades until his death in 1905.  One of their daughters, Lucy, married J. Bartlett Prescott, who started J.B. Prescott Dairy (later Bedford Farms Dairy) in the late 1880s.  The dairy probably used part of the property for its operations.

In 1906 the property was bought by Sarah G. & Luther A. Ford, who lived there until 1918.  It was then acquired by Stephan Kazarian, a weaver, and his brother, who split the property between the portions north and south of Carlisle Road.  The first generation lived in the homestead, but it was vacant by mid-20th Century.

In the early 1980s Ned Leeming and his wife Susan wanted to restore an antique house, and in searching they discovered and fell in love with this house. They had it disassembled and moved to Harvard, MA, where it was painstakingly restored.  In the process of carefully disassembling the house to relocate it, many treasures from everyday life in the house have come to light.  From them, we can imagine what life might have been like over many generations. 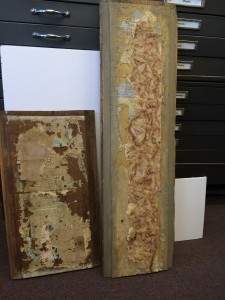 Sections of tongue and groove, hand-planed panels taken from interior walls are still covered with wallpaper remnants, most with scrolling flower patterns that provide a glimpse of what must have been bright, cheery rooms.  Glass canning jar lids, shards of pottery and china, along with an ancient wooden-handled knife and fork, are remnants of the many family meals served in the house over the years.  Dozens of buttons that had slipped beneath the floorboards, along with belt buckles, beads and a broken pince-nez pair of glasses, provide more personal clues to the house’s inhabitants.  A pair of 18th Century work shoes, along with a small child’s boot found inside the walls reveal an ancient superstition; these shoes were placed inside the walls during construction in order to ward off bad luck and evil spirits for the house and its occupants.  Given that this home has survived almost three centuries, including its rescue by the Leemings, perhaps those occupants who left those shoes did manage to bring luck to the old homestead?  Not only is the home enjoying a second life in an orchard in Harvard, but these small treasures, now available for viewing here at the Society, are preserving an enchanting glimpse of the families that called it home through the years. 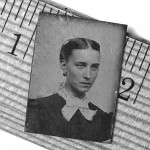 This 3/4″ x 1″ tintype photo was discovered when sweeping the parlor floor before dismantling.